It was my responsibility at VRWERX as lead game designer to get most of the high level programming (gameplay programming, game controls, UI, and animated events) implemented correctly and according to the vision given by the creative directors. To accomplish this, I collaborated constantly with every team member to ensure my implementation of their work was correct. Creating a game in VR is a unique challenge because you have to build the game at a constant 90 fps (or 60 fps on PS4), you must minimize potential motion sickness, and you must be creative with UI. Keeping the game at 90 fps meant my programming had to be efficient, and I assisted my co-workers with fixing any assets that had performance issues.

Minimizing motion sickness meant we couldn’t remove the player’s control of the camera. Therefore, we made up for that by cleverly designing the gameplay and animated events around that concept. For example, there is a scene where the crazy woman surprises you when you turn around from a TV screen. Instead of disabling the players movement (which would be a telling sign that something is about to happen), I created an invisible box around the player. This way the animation would trigger correctly, and the player would not realize they triggered the event. The UI was a challenge as well, because we didn’t want ANY UI on screen during gameplay (to maximize immersion). We designed a 3D journal the player could interact with to view their progress, rather than a popup menu. In the main menu we needed some UI, so we used UE4’s default UI suite to create a floating card masquerading as a TV screen. The player used their VR hands to interact with it. In the tutorial, we also used floating cards with text to explain the controls to the player.

Here is a speedrun of Paranormal Activity: The Lost Soul. The two most complicated scenes were Here and Here. 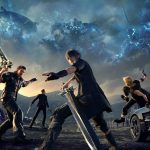